The Biomeiler: Harnessing Heat from Compost

A biomeiler is a large heap of composting woodchips with a water pipe placed in the centre. Bacteria produce heat during the composting process & this heat is captured by water inside the water pipe. This warm water circulates through the biomeiler & can be transported to a heat exchanger (warmtewisselaar) or used directly to heat a space. A biomeiler can also be used to heat water for showers & to wash clothes.

Our biomeiler was used to heat the floor of our dome in colder months. It was designed by Rowin Snijder & built with help from Green Living Lab volunteers. We built a container to hold 50m3 of woodchips & the woodchips were constantly soaked with water from the ditch that runs alongside the biomeiler. 500m of water pipe was placed in the middle of the woodchips & this pipe was connected to 300m of water pipe placed under the floor of the dome. As the woodchips decompose heat is created, & this heats up the water in the pipes. This warm water is then pumped under the floor of our dome to provide additional heat when required.

Experiment: Usually biomeilers are made with much larger volumes of woodchips (for example 250m3) & need a lot more space to be realised. We built a terrace on top of the biomeiler to create more space for our workshops. Biomeilers do not usually have terraces built on top of them, so our biomeiler is an experiment to explore the possibilities of creating a functioning biomeiler in an urban environment with limited space. We inserted sensors into the biomeiler to record its temperature & so far the temperature at the centre has been recorded as 70 degrees Celsius. The temperature fluctuates depending on the location of the sensor, how much light the biomeiler has received if the top of the terrace has been lifted for maintenance & according to weather conditions. 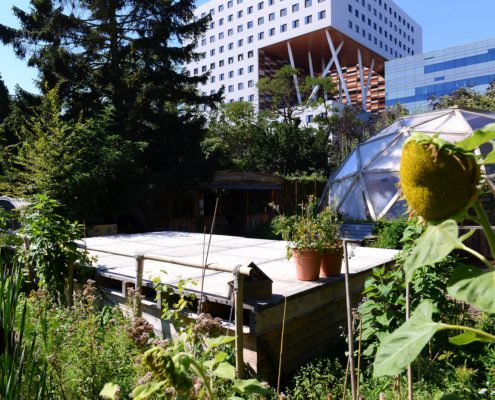 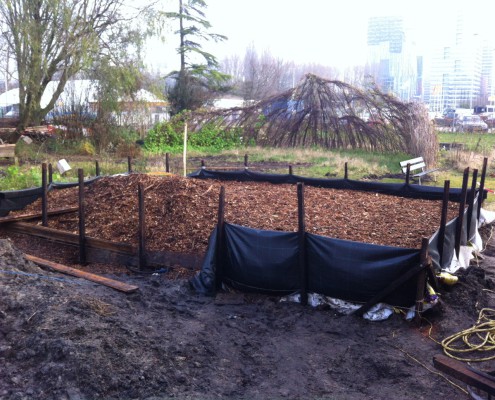 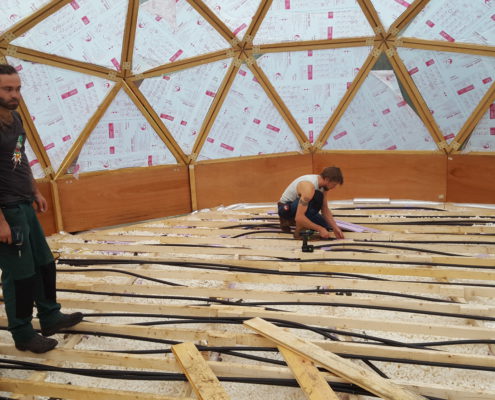 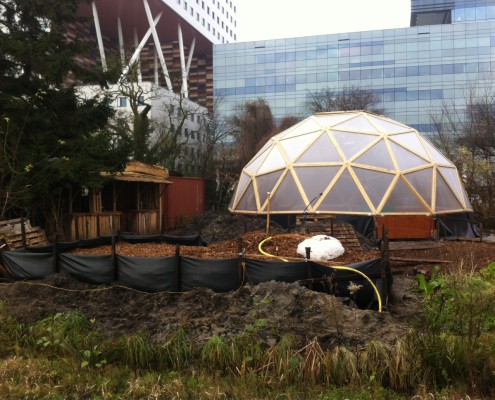